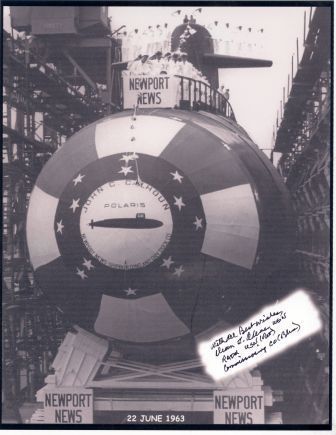 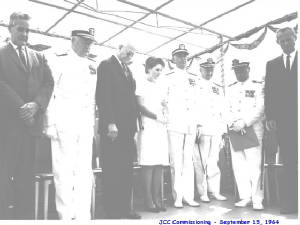 Rosalie J. Calhoun, the great-great grandaughter of John C. Calhoun, is the ship’s sponsor. At age 14, Rosalie, christened the ship. Rosalie is the JCCVA’s only Honorary member! She has been involved with JCCVA from the early days and she faithfully attends our reunions. We are grateful for her continued association and support of our organization. Her presence at our functions is one of the highlights of every reunion.

16 MAY 1972 – With the return of USS John C. Calhoun (SSBN-630) from Poseidon patrol at Holy Loch, Scotland, a total of 1,000 Polaris/Poseidon deterrent patrols had been successfully completed (975 Polaris/25 Poseidon).

USS John C. Calhoun was the fourth of ten ships to be constructed in the series of submarines known as the James Madison class. This class succeeded the Lafayette class and its ships differed from those of its predecessors in only one way—the inclusion of an improved missile system which was capable of carrying Polaris A-3 missiles and exhibited enhancements in the ships’ missile guidance, navigation, and launcher systems.

The James Madison class was the fourth of five classes of submarines comprising the US Navy’s fleet of ballistic missile submarines known as the “41 for Freedom.” This collection of submarines had a primary function to serve as a deterrent force against the threat of nuclear war in an effort to preserve peace with the Soviet Union during the time period of political conflict known as the Cold War. The motto of the USS John C. Calhoun embodied this mission—For Peace, Ready.

Subsequent to her shakedown training, which took place along the East Coast of the United States, John C. Calhoun began her career as a member of Submarine Squadron 18 and initiated her deterrent patrols, the majority of which were classified, on March 22, 1965.

Throughout the course of her career, John C. Calhoun was the recipient of two Navy Meritorious Unit Citations in addition to a National Defense Service Medal and underwent two upgrades to her missile systems being refitted with Poseidon missiles (1969-1978) and later Trident I missiles (1979-1982).

On March 28, 1994, USS John C. Calhoun was concurrently decommissioned and stricken from the Naval Vessel Register. Her scrapping took place in Bremerton, Washington via the Nuclear- Powered Ship and Submarine Recycling Program and was completed by November 18, 1994.

Polaris Missile A1 Had a length of 32.3 feet and a diameter of 54 inches. The missile had a pre-launch weight of 28000 pounds and was powered by a 2-stage solid rocket motor with a range of 1200 miles and carried a singel EC47 (W47) Nuclear Weapon warhead. A Mk 80 Mod 2 fire control system was used by the missile and launch platform. This was the first sea-launched ICBM. Fitted on the first five Polaris boats (598 class above). These boats were refitted to fire Polaris A3 starting in 1964. The George Washington fired the first missile at sea. The Patrick Henry was the first go on a Deterrent Patrol.

Polaris Missile A2 Had a length of 32.2 feet and a diameter of 54 inches. The missile had a pre-launch weight of 30000 pounds and was powered by a 2-stage solid rocket motor with a range of 1500 miles and carried three W47 Nuclear Weapon warheads of 200 kilo-tons each. Fitted on the five Ethan Allen-class boats plus the first 13 Lafayette-Class boats. These boats were refitted with A3s starting in 1968.

Your cart is currently empty!